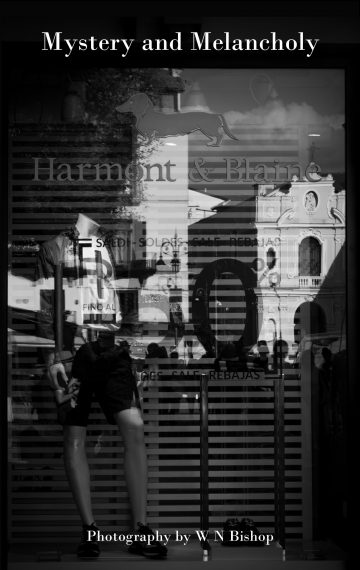 To give it its full title, Mystery and Melancholy of a Street.. is an emerging style influenced by the Metaphysical art of the Italian painter Giorgio de Chirico (1888-1978).

The critic Robert Hughes described de Chirico work as resembling that of his contemporary, Edward Hopper:

In 2018 I accompanied my daughter on a trip to Slovenia and just prior to that trip I had began to research the works of de Chirico – particular those works he painted in the years between 1911 and 1930 – and Slovenia was the first opportunity I had to consciously shoot images in that style.

Originally, my intention was that ‘Mystery and Melancholy’ would form the basis for a small, stand alone, project – it has though become more of a defining style that now influences much of my work, better defined as Anxious Journeys

Alongside my two long running projects – The Unreturning and the Township Project – this theme has now become the defining narrative for almost all of my new work – based loosely around traveling.

Some images represent new work when travelling has been possible and others, like Staycation, represent images taken during the Covid-19 lockdown periods of 2020 and 2021. This series also includes the reworking of older narratives in this style:

I’ve always been inspired by some of the great documentary photographers and photojournalists – Brassai, Don McMullin, James Revilious and Paolo Pelegrin are just a few of the names that come to mind…

In this section I have reworked some of the past events that I have covered and activities that I have recorded (including some portraits I have taken) alongside publishing new work.

Past work has included royal visits, events like Oxford Fashion Week and protest – climate change and the visit of Donald Trump.

In a completely unconnected way I also came across a fragment of a poem that also connected with this style:

I would say this landscape Too is a document. But What is a landscape? A procession Across the soul that thinks.

Following some research I tracked down the poem: ‘The Foggiest’ by the American poet John Ashbery (1927-2017).

Further research revealed that Ashbery may well have provided the only English language translations of di Chirico’s poems and novels and, in particular, his 1929 novel ‘Hebdomeros’