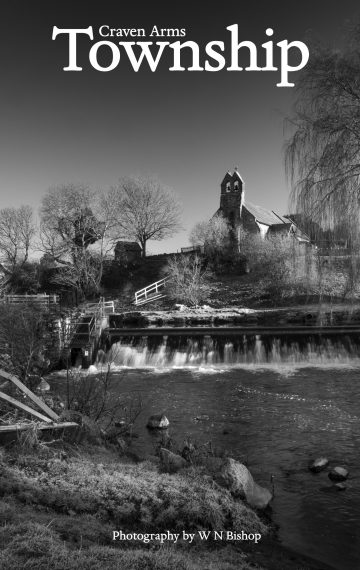 The Township Project is a record of the changes and evolution of the small Shropshire town of Craven Arms (once known as Newton Township). Recording subtle changes – human change, changes in nature and the changing of the seasons.

For many towns and villages, the arrival of the railway brought change and the tiny Shropshire settlements of Aldon, Newton, Halford, Stokesay and Whettleton would grow with the railway into one – Newton Township – and then, eventually, the town that we know today as Craven Arms.

Out of familiarity comes nuance. The more you revisit a subject the more you’re likely to discover… Photographer Ray Metzker

The Craven Arms Hotel, the inn that would eventually give the town its final identity, was built in 1803 to support the stage coach trade and was named after the then owner of Stokesay Castle, Lord Craven.

At that time, the village of Newton was the heart of the local community with its own inn (The Red Lion), Mission Hall, blacksmith and wheelwright shops, but the village became increasingly side-lined when Thomas Telford (the county surveyor) rerouted the main road closer to the Craven Arms Hotel – following the loss of the original road bridge in the floods of 1821 – effectively turning Newton into a cul-de-sac.

When the railway arrived in 1852 the new station – to be called ‘Craven Arms and Stokesay’ – was also located close to the Craven Arms Hotel.

This completed the switch of focus away from Newton and placed the Hotel at the heart of the new and growing railway junction.

Land opened up new land for development – Market Street, Newton Street and Dale Street – a new market hall (1889), a School (1895) and the Temperance Hotel would follow.

Development of housing for the blue-collar workers began to focus along the Shrewsbury Road (now the A49), with ‘doctors, shopkeepers and other professionals’ choosing the Clun Road (the B4368) for their homes and…

But, the railway came and then mostly went. The station survived the Beaching cuts of the early 1960s, but the town’s days as a major railway junction had long gone – now just a stop on the Cardiff to Manchester Line and a junction for the single-track Heart of Wales line.