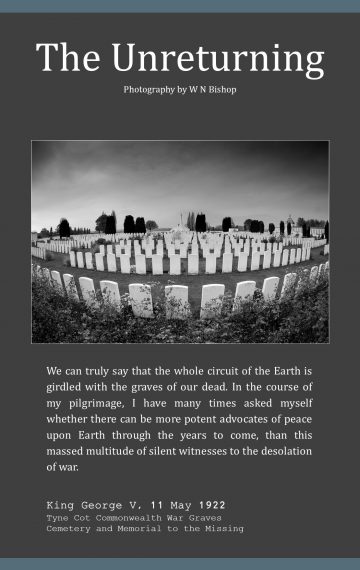 The Unreturning focuses on Remembrance – taking its name from a poem by Wilfred Owen, the First World War poet.

The poem, like much of Owen’s work, was published posthumously as Shropshire born Owen was killed in action on 4 November 1918 – just one week before the armistice.

Each one whom Life exiled I named and called.
From The Unreturning by Wilfred Owen

The Unreturning project includes pictures from Ypres (taken on the weekend of 11/11/11), Tyne Cot Cemetery and at the D-Day 60, D-Day 70 and D-Day 75 commemorations in Portsmouth.

My intention had been to complete this project in 2020 by recording the commemorations to mark the 75th anniversary of the ending of the Second World War, but Coronavirus (Covid-19) prevented that.

The images taken on the weekend of 11/11/11 in and around Ypres have also formed the basis for an exhibition at Bishop’s Castle Town Hall to mark the centenary of the start of the First World War and to commemorate the end of the war in 1918.

Since it’s initial inception, the work has grown exponentially and the challenge has been to find a way to bring the very different and diverse strands together in a coherent way. I am currently working on the idea that pictures will be divided into three sections or themes: